BEIJING, Sept. 15, 2022 /PRNewswire/ — JA Solar has received the highest possible AAA rating on September 13 when PV Tech released its PV ModuleTech Bankability Rankings for the third quarter of 2022. The list saw JA Solar’s leading manufacturing advantages and solid financial position reflected in key indicators such as shipments, capacity layout, technology layout, and financial performance. According to the report, JA Solar is one of the most consistent A-grade suppliers in terms of all the key metrics for the period 2014 to 2022. 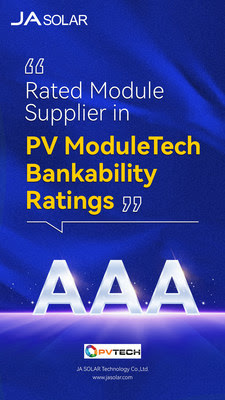 Steady and balanced business development across the globe

On August 26, JA Solar released its 2022 semi-annual report, which shows JA Solar’s overseas shipments accounted for 67% in the first half of 2022. In recent years, JA Solar has continued to steadily expand its international reach, with overseas shipments consistently contributing 60% to 70% of total shipments. JA Solar has now established complete industrial chains at home and abroad respectively based on its 12 manufacturing bases around the world, providing strong capacity support for its shipments to global markets.

JA Solar’s global market share reached 14% in 2021. Specifically, its share in established markets continued rising, including Europe at approximately 18% and China at approximately 19%; in emerging markets, JA Solar’s share in 2021 scaled to a record high of 46% in Pakistan, 58% in Malaysia and approximately 40% in Israel. Moreover, it has also found new outlets such as Guyana in South America, Sierra Leone in Africa, Tahiti in Oceania, and Uzbekistan in Central Asia, contributing to steady business development across the globe. As indicated in the PV ModuleTech report, JA Solar will become more competitive in the US market with the advancement of its global production layout.

A step ahead in technology-driven development

JA Solar has kept increasing its investment in scientific research to meet the evolving market demand and promote the technological iteration and upgrade of the industry. As of the first half of 2022, JA Solar had been granted 1,178 patents for independent research and development. The average conversion efficiency of its mass-produced Percium cells has reached 23.7% and that of n-type cells has reached 25%.

Particularly, the Percium-cell-based DeepBlue 3.0 modules have attracted market-wide attention around the globe since the first order was shipped in October 2020. By the end of June 2022, shipment of the product had amounted to 24GW. And it has been applied in key global projects such as the Beijing Fengtai Railway Station rooftop PV project, the rooftop PV project of the UN Compound in Beijing, the world’s largest integrated source-grid-load-storage project in Ulanqab, Inner Mongolia, and the Uivermeertjes floating PV project in the Netherlands which is the second largest floating PV park outside of Asia.

In May 2022, JA Solar launched the n-type cell-based DeepBlue 4.0 X module, which boasts a cell conversion efficiency of 25% and a maximum power of 625W. Compared with mainstream p-type modules, DeepBlue 4.0 X can reduce balance of system (BoS) costs by up to around 2.1% and levelized cost of electricity (LCOE) costs by 3.5%-5%, which can further increase the profitability of projects and create greater value for customers. JA Solar’s n-type cell capacity is expected to exceed 27GW by 2023, making it one of the first enterprises to develop n-type cells and put them into production.

JA Solar is also promoting intelligent manufacturing by accelerating digital transformation. During the production process, it has achieved meticulous quality control ensuring quality is kept on a short leash through it 24-hour real-time detection and automatic warning system. Taking JA Solar Yiwu manufacturing base as an example, JA Solar realizes digital intelligence during the whole process from planning and production to logistics, enabling “visibility of the 7-day delivery process” of an order and ensuring precise control of production efficiency and product quality.